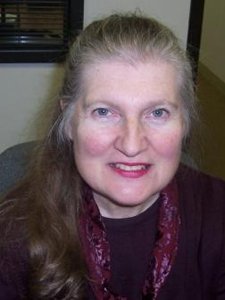 Lorraine Duggin has a B.A. and M.A. in English from UNO, and a Ph.D. in English/Creative Writing from UNL. Her poetry, fiction, memoirs, essays and articles have been published widely and have received numerous awards.

LITERATURE: Students study forms, strategies, and techniques of poetry, short stories, creative non-fiction, and memoirs, which can include point of view, persona, diction, metaphor, alliteration, half-or slant rhyme, narration, conflict, tension, free verse, haiku, journaling, and many other aspects of writing, using our own work or the work of model writers as examples. In the classroom, we look at ways to fit the thought to the appropriate form. We practice constructive criticism and editing, honing in on and nurturing whatever helps us write clearly, effectively, and in an aesthetically pleasing way. On occasion, particular authors are used to enhance curriculum, such as Willa Cather, or particular countries or geographical areas, such as the Czech Republic or Eastern Europe. Residencies have included lessons on Czech, Spanish, or Scandinavian languages, folklore and folktales, or traditional costumes and dances, as the particular residency requires or permits.

FOLK DANCING: We learn individual dance steps, figures, and dances from countries around the world, including Eastern Europe, as well as Greek, German, Mexican, Scandinavian, Scottish, English Morris, Israeli, French, South American and many others. Sometimes dances are combined with lessons in literature or writing; for example, learning the dances that might correspond to a certain setting in a novel that students are reading, or dances that exhibit a particular motif, or dances combined with historical/geographical/linguistic or basic math or science studies, connecting multicultural or multi-disciplinary ideas whenever possible.