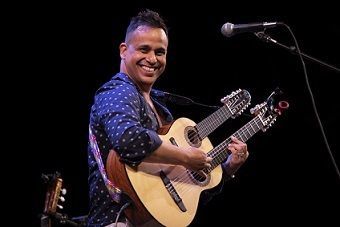 Daniel Martinez, Flamenco guitar wizard, composer and teacher hails from Iquitos, Peru. Growing up surrounded by the ocean and the Amazon, Martinez first picked up the guitar as a young teen at the encouragement of his mother. He quickly discovered his natural talent for playing guitar and followed the natural path of a teenage boy pushing the boundaries.

It wasn’t until he moved to the United States and enrolled at Union College in Lincoln in 2002 to study English as a Second Language that he started to take his music seriously. Martinez honed his skills through the mastery of classical guitar training and preparing for and winning national guitar competitions. Daniel has performed in Peru, Chile, Ecuador, Bolivia, Brazil and Canada and across the United States. Today, he plays all musical styles, but his specialties are Latin rhythms such as Flamenco, Rumba, Bossa nova and more. He has four solo instrumental recordings later, and many music collaborations, he is a sought-after instructor of all styles of guitar for all ages as well as being a familiar presence on stages in the region. Daniel is also guitar professor at Union College and owner of Daniel Martinez Music. Martinez is a Music and Culture touring and teaching artist through the Nebraska Arts Council, Teaching Artist for The Lied Center for Performing Arts, Guest Artist for John F. Kennedy Center for the Performing Arts in Washington DC. He is also a passionate instrumental artist for Pacific Press, Chapel Records, 3ABN TV station, and Loma Linda Broadcast Network TV.