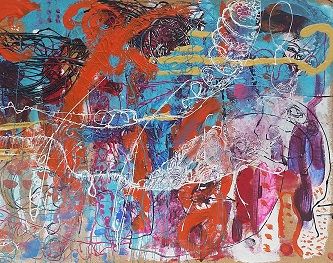 Whether viewing or creating a painting I find myself questioning whether I understand what it means to see. It's obvious to me that I take this gift for granted and that my understanding of it is limited. Sight and seeing do not exist in a box. They're attached to the other senses of course but they are also attached to the will, intent, thought, psyche, spirit and belief and purpose of a person.

All people naturally curate their world and set up the stage for what they see. We do this based on a “feeling.” That “feeling” exists the way it exists because of exploding stars and thousands of millions of years of evolution on Earth. It also exists because of experience but for most, it is a small number of definitive experiences that shape our beliefs and thus our sight. Moments from childhood reverberate throughout a lifetime. So, one could somewhat accurately say that “Sheena is a punk rocker” because a significant negative experience imprinted itself on a 4.6 billion year old physical system in her body thus solidifying a nihilistic belief into her spirit and psyche. “Nothing's real man.”

I've known people who have spouted that philosophy with passion. That claim can be explored to some degree. There are even calculations by astrophysicists and others who are working out the mathematical maps of the universe that conclude that all is empty and illusive, everything from an electron to a tear of joy in your happiest moment. My explorations of this idea are not definitive and are for sure limited. I know that some say they find freedom in meaninglessness, but I reject this philosophy. I'm even prepared to reject it if it's mathematically accurate.

Instead I believe, pursue and see the exact opposite of this idea. That is that “Everything is real.” I find this idea much more useful in life especially as an artist. The world without some spiritual belief, pursuit of the mystical or belief in God is a little dry. As an artist I try not to overplay my immersion in mystical things or my belief in God because it can dangerously and arrogantly suggest that I have somehow managed to understand existence to some final conclusion or at least uncover some mystical secret. Which of course I have done, but I'm currently too young and lacking in credibility to discuss the matter.

The point I'm moving toward is one that many have adhered to before me. The idea that life is infinitely real and is imbued with substance and meaning in every tiny building block of its structure is one that I believe allows for a deeper experience and is even a pre-condition for Joy. Many people pursue happiness and happiness is good, but Joy is an adventure!

With my paintings I intend to invite you to journey into mystery in pursuit of joy. I hope that as some of these works catch your eye and you look deeply into them you find unexpected surprises that remind you that these walls and this day are much more than meet the eye. Remember that just because a thing is unseen doesn't mean it is hidden. Look deeply, explore the mind of the world, use your feelings and see.