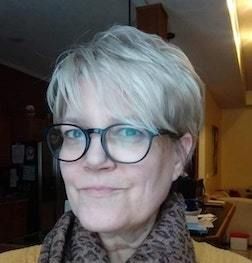 DawnMarie Moe has a purpose — to bring inclusive theatre, based in Shakespeare, to public and home-schooled students. She is especially excited to work within small, rural communities of Central and Western Nebraska. Customized classes focus on theatre basics (voice, movement, character, relationship), integration of theatre into special education programs, and exploration of Shakespeare’s plays culminating in performance. Performance-driven classes include study of language and history. Her residency activities fit neatly within Nebraska’s Fine Arts Standards.

A member of Actor’s Equity (as Dawn Benz), she has worked professionally for over 30 years performing on television and on stage across the US. She studied with Lee Strasberg, David Gideon and Susan Cohen in NYC, has been directing since 2008 and coaching young actors since 1996. Favorite roles include Emma/Losing the Ring in the River, Juliana/The Other Place, Beth Loffreda/Laramie Project: 10 Years Later, Eleanor/Lion in Winter, and Gertrude/Hamlet. Favorite directing projects include Hamlet, Much Ado About Nothing, Macbeth, As You Like It, The Tempest, and Romeo and Juliet.