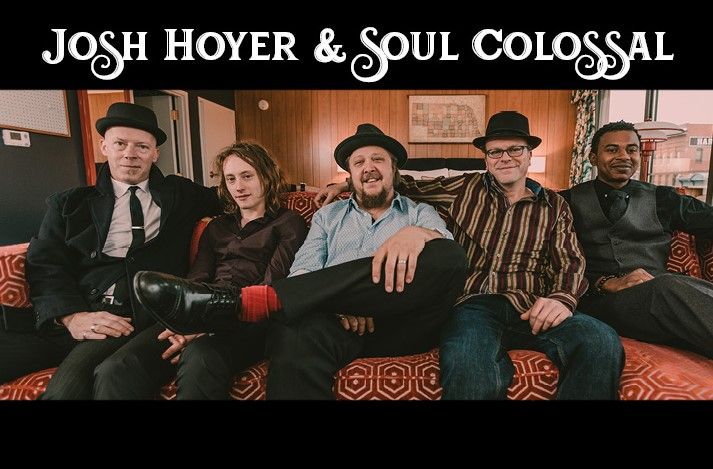 Josh Hoyer & Soul Colossal’s combination of soul, funk and R&B is, in a word, electric. Best displayed in their high-energy live show, the blend of Hoyer’s honest lyrics and his rich, intensely soulful vocals merge with his top-notch band to create an undeniable chemistry.

Hoyer formed Josh Hoyer & Soul Colossal in 2012 in famed blues town Lincoln, Nebraska. The award-winning five-piece band includes some of the area’s most revered and accomplished musicians. Joining Hoyer (keyboards/vocals) is Benjamin Kushner (guitar), Blake DeForest (trumpet), Mike Keeling (bass), and Larell Ware (drums). Inspired by the sounds of Stax, Motown, Muscle Shoals, New Orleans, Philly and San Francisco, the band continuously crosses musical boundaries both in style and era, and joins forces each show with a common goal – to have the crowd dancing so much they forget even their smallest troubles.

In 2017, Josh was featured as a contestant on NBC’s The Voice, and the band completed their first European tour; a 27-city stint capped with a live album release from their show in Brussels, Belgium.The hard working band completed several national tours from 2015-2017, playing more than 150 shows in 32 states each year, including opening for George Clinton, Charles Bradley, Booker T Jones, and Muscle Shoals Revue. Their year-round touring schedule took them from coast to coast, including several major summer music festivals.

Technical requirements: The ensemble requires a PA and monitor system that fits the performance space. Artists will supply their own instruments and amplifiers, but would need a professional sound and lighting system along with an engineer to run them. Touring stage plot and input list can be shared upon request with the artist.

Virtual Option: Artist can play solo with piano and vocals or with backing tracks. Full band is not available for virtual performances.