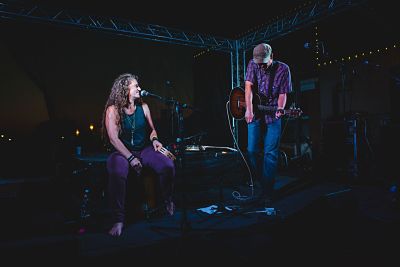 Ted and Alice Miller write the type of wind swept prairie poetry that comes so naturally to native midwesterners, and speaks so easily to the hearts of working people around the world. With songs so funny you could cry and so sad you could laugh, their music draws from classic Americana and progressive folk alike, giving them a sound that is as timeless as it is original.
As a husband and wife songwriting duo, Ted and Alice’s intimate bond is what makes their music so unique. Ted’s propulsive rhythmic guitar mixes perfectly with Alice’s auxiliary percussion to provide a natural backdrop for their closely woven vocal harmonies, bringing the strength and conviction of their emotional story telling to life. The pair disregards the search for image and fame and instead focuses on writing songs that speak to the deepest feelings of their listeners.

Starting with their 2012 debut ‘Muscle, Bone, Skin, and Fat,” Ted and Alice Miller have been steadily building their reputation on the midwest folk scene. In 2015 their album “Small Talk” was named Americana Album of the Year, and their 2016 record “Adults Don’t Speak” was named Young Original CD of the Year by the Rural Roots Music Commission. They are currently hard at work writing new songs and traveling across the region winning over new fans one song at a time.

Technical requirements: Ensemble is able to provide sound system if needed. If sound is provided the group will need two vocal mics and stands, two input channels, one floor boom and mic for cajon. Lighting is not needed, but would be appreciated if playing at night.